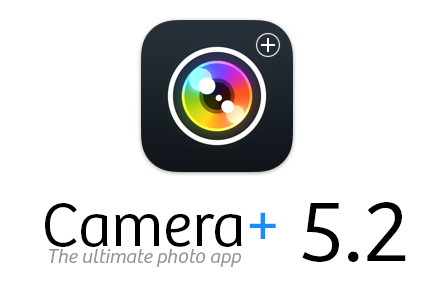 Here’s all the news you can use…

With iOS 8 right around the corner, we’ve got some pretty big things planned for the near future, both with the iPhone and iPad versions of Camera+. To tide you over until then, we’ve just put out Camera+ 5.2 with a few very nice additions, along with a handful of bug fixes.

The first thing to note is that we’ve added a new adjustment to the Vignette effect in The Lab. So now, in addition to being able to adjust the intensity of the vignette, you have control over the size of it. It makes it a lot more flexible of a tool to use.

We’ve also made a few improvements to the Soft Focus and Film Grain effects in The Lab. The end result is that they look far more realistic now and your photos will look a lot better when you use them.

Oh Clarity Pro… he can be like a petulant teen who’s always trying to be the center of attention. This time around, we discovered that low intensity levels could get inappropriately boosted under certain circumstances. That won’t happen again. This isn’t the first time Clarity Pro has acted-up in a similar manner, so we’ve taken away his car privileges for a month to teach him a lesson.

To continue their ongoing mandate of paranoia to make everything more “secure” while making everyone’s lives much more difficult in the process, Yahoo changed the way 3rd-party apps like Camera+ access Flickr. This, of course, broke Flickr sharing in Camera+. It’s now working properly once again. We tried contacting Marissa Mayer so that we could get a bit of a heads-up when something like this happens again in the future. Unfortunately, she’s hunkered-down somewhere in Texas in a bunker with a cache of assault rifles, so she couldn’t be reached for comment.

So again, get ready for some cool, new things in Camera+ very soon. We’ve been slaving away at it since Apple announced iOS 8 and we’re sure you’re going to enjoy using it as much as we’re enjoying creating it for you!