Camera+ 6 has arrived, putting world-class manual control into your hands 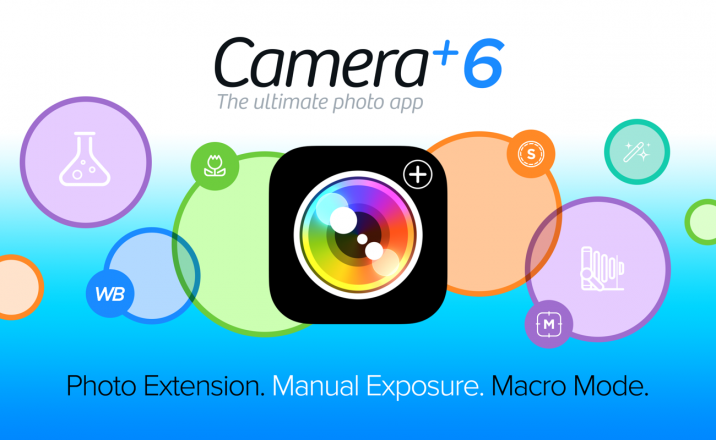 Well, the big day is here. I’m thrilled to present to you the sixth major incarnation of the top-selling photo app of all time… Camera+ 6!

I’ll kick things off with a brief video of mobile photographer extraordinaire, Jack Hollingsworth, showing you what’s new in the app…

Here are the Camera+ 6 release notes, illustrated with screenshots…

Mark today in your calendar as the day that your iPhone camera crosses over from adolescence into adulthood. Why?? Because Camera+ 6 is here!

So what’s the big deal, you say? Well, what we’ve done for you is added a full range of manual shooting modes and controls to give you the ultimate control over your photography.

What’s that? You’re saying that there are now several camera apps that are touting manual controls? Just toss those aside because Camera+ has manual control Done Right. For us, being first to market with manual shooting control was far less important than being the best at it.

It would’ve been easy enough to just throw a few sliders in the app and call it a day. But no… we wanted to do better. Much better. And that’s where our innovative, intuitive wheel control comes in. We spent quite a while getting this just right… roll it, flick it, swipe it and it obeys your every command. You’ll forever look at slider controls with scorn and contempt from here on in.

So exactly what controls did we add that utilize these magical, mystical wheels? You’re now able to manually adjust focus and exposure to get exactly the shot you desire.

Manual focus is very straightforward… easily go from the closest of closeup to the widest of wide angle with a simple flick of the focus wheel. 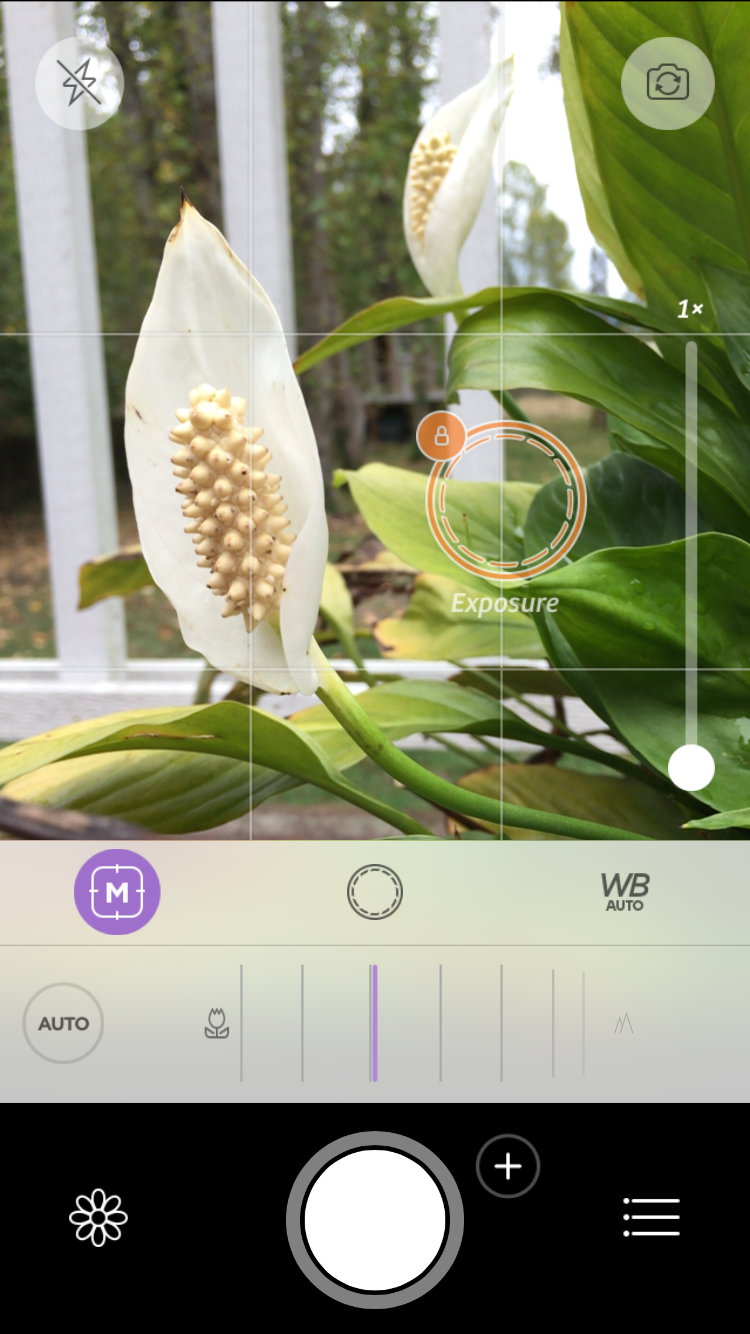 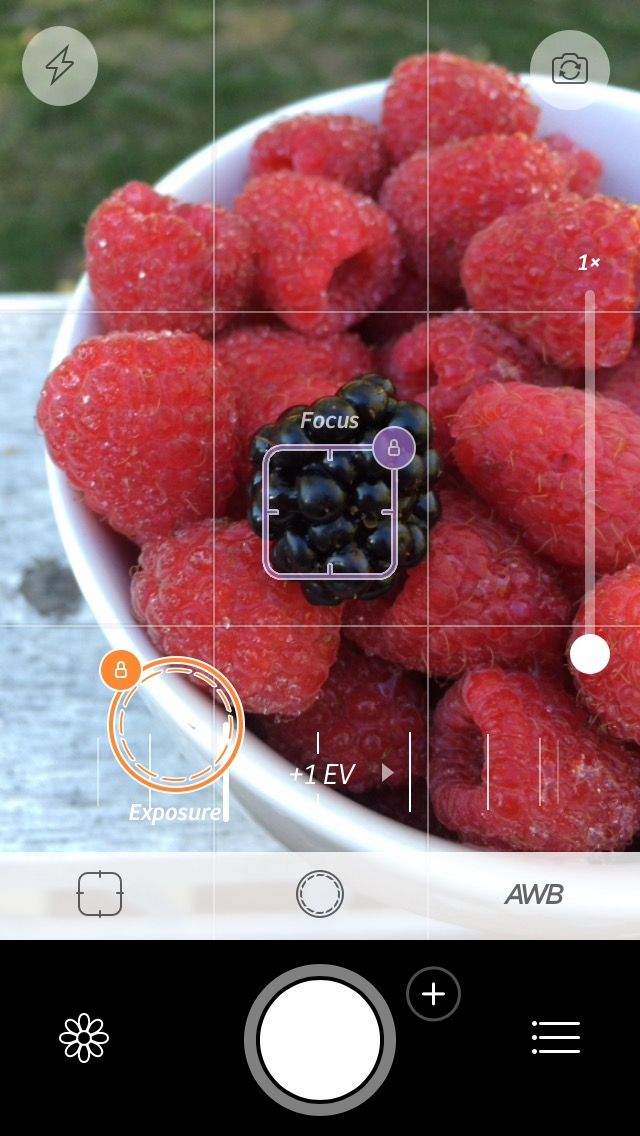 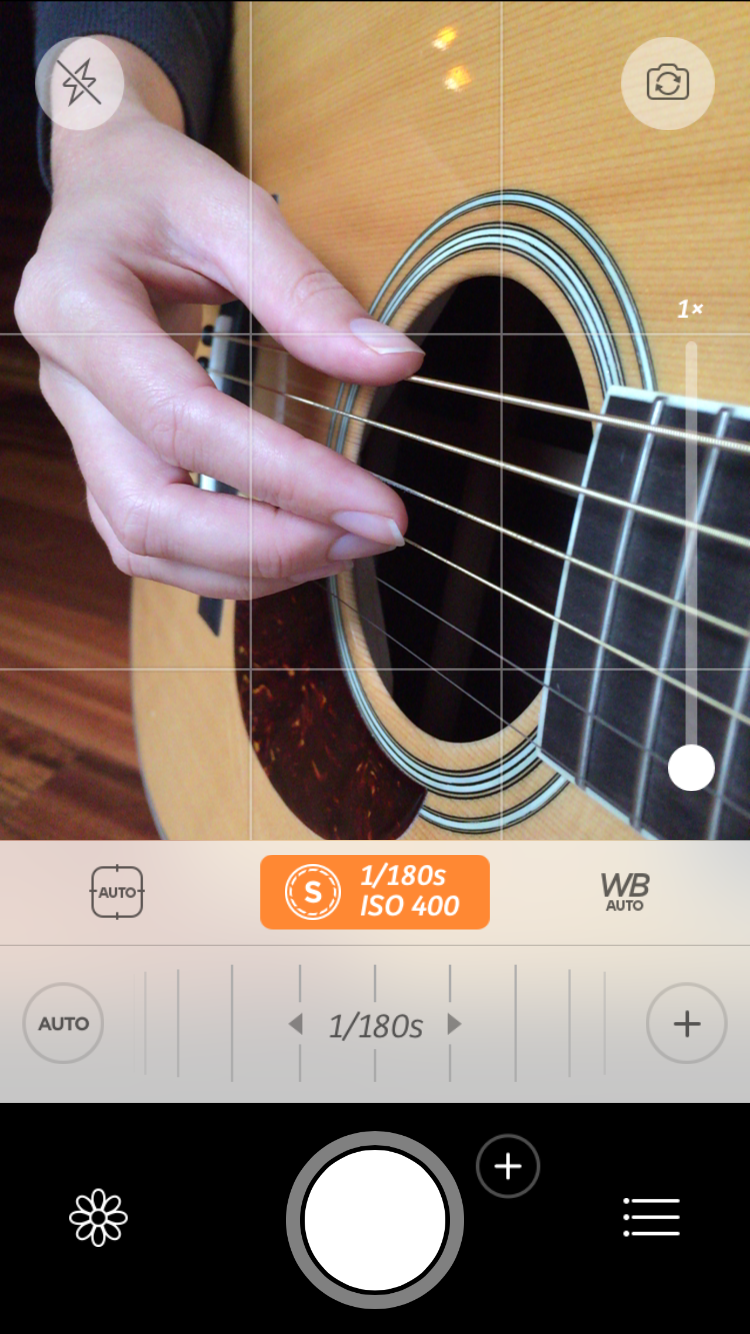 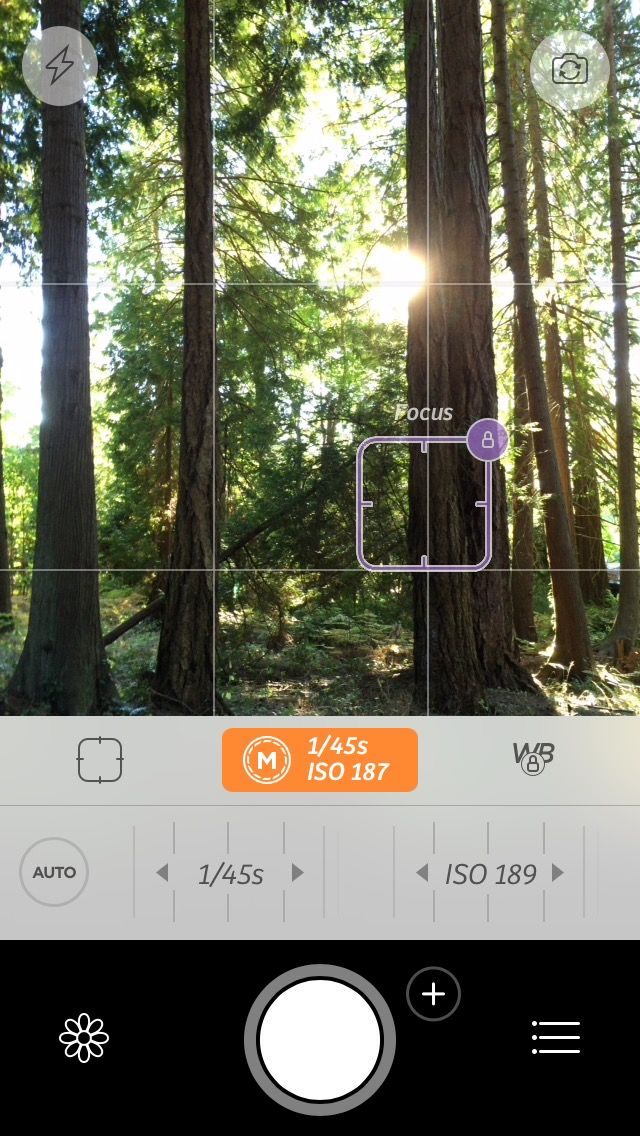 Also new to Camera+ 6 is a set of white balance presets to enable you to get just the right tones for whatever shooting condition you’re in. 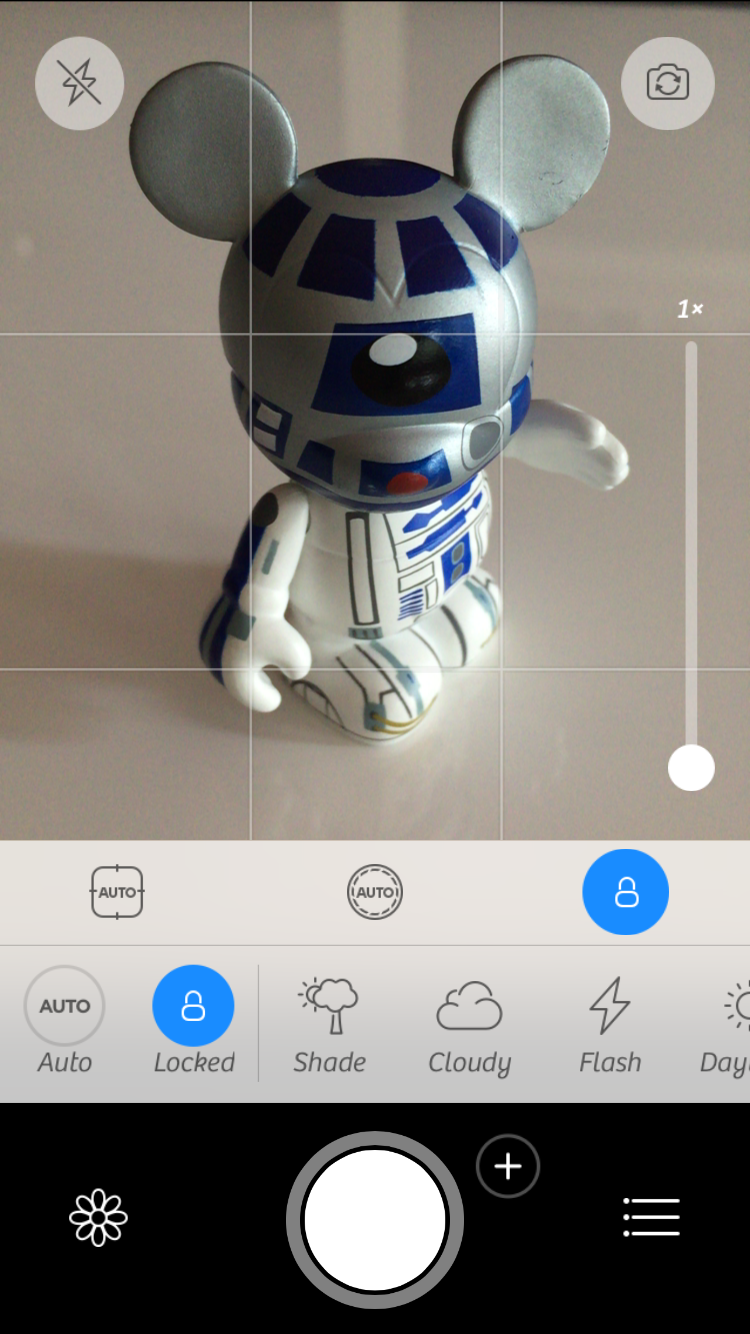 Who doesn’t love a good macro shot? In Camera+ 6, we’ve added a handy Macro shooting mode so you can now photograph the creepiest of crawlies with ultra-sharp focus and magnificent detail. Selfies and latte shots are sooooo yesterday… be the first aboard the macro bandwagon! 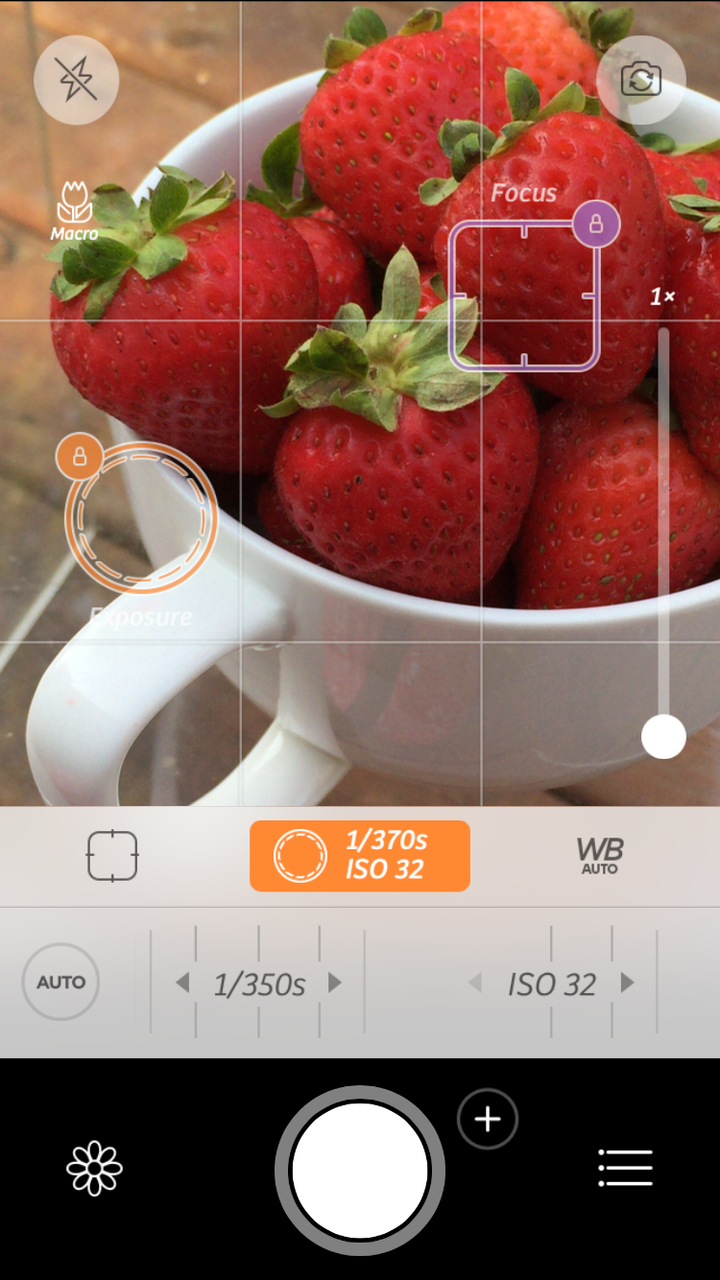 Have you ever wanted to use Camera+’s world-class editing features on your existing photos without having to go through the effort of importing them into Camera+ and then saving them back out? Now you can because with Camera+ 6 you’re able to edit your existing photos right within the stock Photos app. Apple calls them Photo Extensions but we like to think of them as out of body experiences for the app. We’re sure Shirley MacLaine would agree. 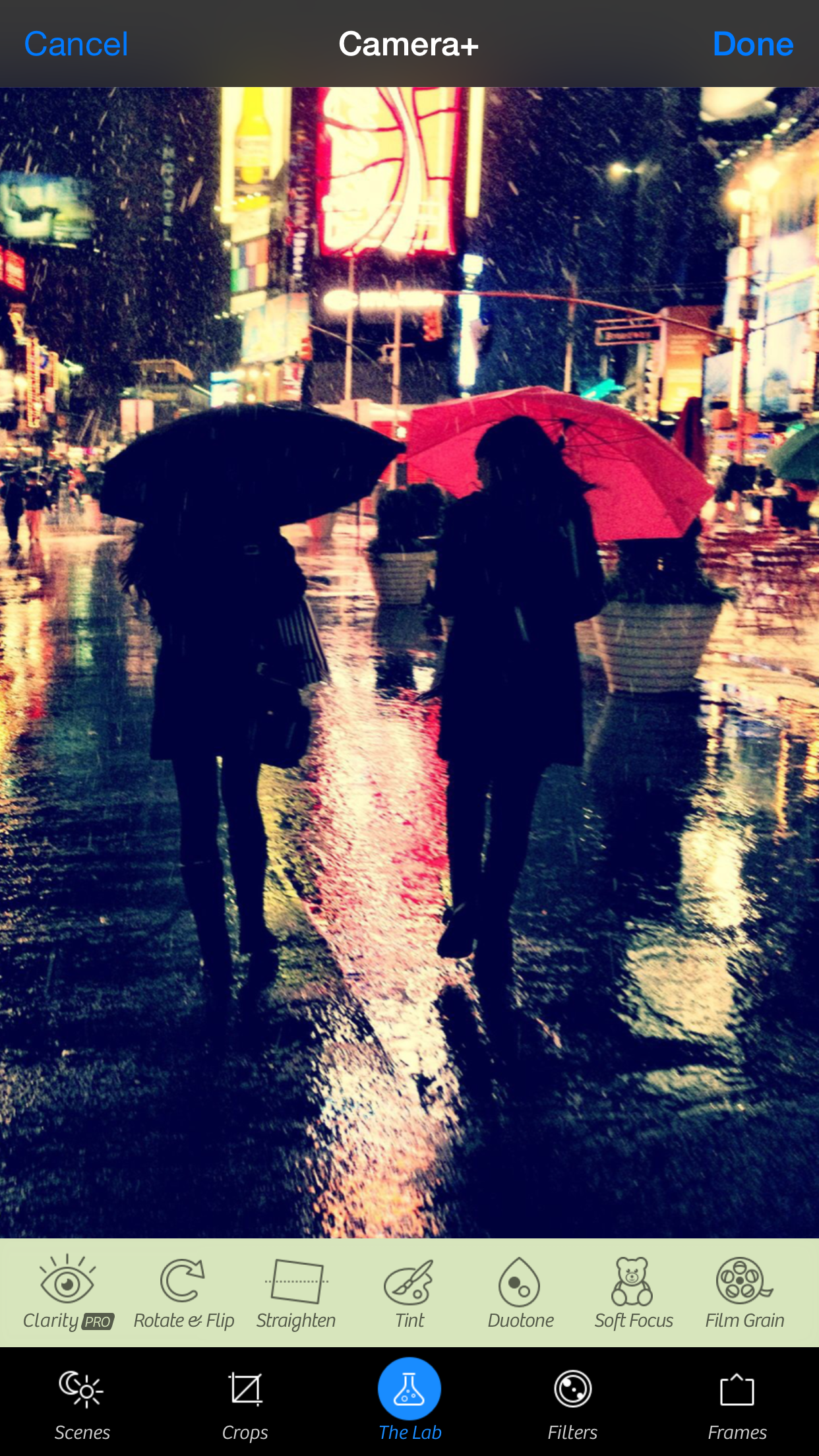 While Camera+ provides a full set of photo editing controls, it’s always better to get things right first when you’re shooting and the new manual controls in Camera+ 6 go a long way in helping you to achieve that goal. We know you’re going to love the new power they provide you with.

Some background on the design/development process of v6

When we got our wishes at Apple’s Worldwide Developers Conference this past June and it was announced that we were finally getting access to manual camera controls, along with several other photo-related goodies, we couldn’t have been more ecstatic. As many of you are aware, we’re a very design-driven company so with this news, we went straight to the figurative drawing board.

We’ve planned for the day that we’d have this kind of control for a while now, doing several UI mockups in Camera+’s four+ years of existence but when the time finally came, it was almost like we started from scratch. Camera+ has evolved a great deal over those years and what made sense in the past didn’t necessarily make sense with regard to the current state of the app.

So we took a step back and evaluated how manual controls would make the most sense, given where things were currently at in the app. It’s not as easy as it may sound because it took us several major attempts to get it to the point that we feel is right. We’re coming from the perspective that we have a very well-established app with about 13 million customers, so they would’ve been very bad moves to either just shoehorn in a new set of controls… or to change around those very well-established behaviors that’ve helped make the app as easy to use and intuitive as it is.

Camera+ is widely regarded as the best shooting app out there and we wanted to do everything in our power to make sure that we not only remained with that distinction, but really brought things to the next level. Basically, a major goal of ours was to continue to set the standard for the mobile phone camera shooting experience.

Since iOS 8 became available last week, I’ve tried out several updated and brand new camera apps that’ve incorporated manual shooting controls in them. I honestly haven’t come across a single one yet that has a slick, intuitive feel to it. Rather than be first to market with manual shooting controls, we strongly felt that we should take the time to do it as well as we possibly could and try hard to be the best out there with Camera+ 6.

After many, many attempts, we finally felt that we got the UI design to a point where the manual controls felt like a natural extension of the shooting controls currently in Camera+. Using the progressive disclosure concept, we were able to incorporate a whole new level of shooting control to the app where novices wouldn’t be inundated with unfamiliar, intimidating controls… while more advanced users would be able to easily access a new set of intuitive controls to empower their photography.

You can think of progressive disclosure as a way of deferring the availability of functionality until it’s explicitly requested. This keeps clutter down and makes it so that the more advanced functionalities are kept out of the way of people who have little or no use for them. The balancing act here revolves around not making it so that the advanced features aren’t too difficult to access for the people who do want them.

It’s not like progressive disclosure is a new concept, even in the camera app realm. Take the standard Apple camera app for example… the camera starts off in the most simple automatic mode and not until you tap on the viewfinder do you have access to slightly more advanced focus and exposure controls. Since the earliest days of Camera+, we’ve followed Apple’s lead here but went steps beyond by enabling you to have finer control over focus, exposure, and white balance through our ever-evolving suite of controls. And now, with Camera+ 6, we’ve gone much further with progressive disclosure where you now can have complete manual control over just about every camera function on demand.

By the sound of it, you’d think we were done after all the iterations I mentioned and we could’ve just slapped a big ‘6’ on it and shipped the app. Well, life just isn’t that simple sometimes. Much to the annoyance of the programming team, the design team reevaluated things a couple more times because there were a few parts that still didn’t feel just right yet.

The end-result is what I have the pleasure of presenting you with today and I really do feel like we’ve nailed-down the advanced shooting experience on an iPhone. But you’ll be the ultimate judge of that. Be sure to let us know your thoughts on it all in the comments.

This release may have been the hardest the whole Camera+ team has worked on an update to date. We’ve got the best development team in-place now and it’s a wonderful experience working with everyone on the team. Please take a peek in the Info section in the settings menu in the app to see all the fantastic people who work so hard to bring these great updates to you.

Go get Camera+ 6 now in the App Store and take your photography to the next level!